by ltgbrown
This is also part of the establishment of a third Joint Force Command within NATO. Something I have had a part in making happen.

by ladajo
It is too bad that the "Op" of OPNAV will never return. It has been fully outsourced to USFF.
Now, if we can get USFF to get out of the OP business, stand-up LANTFLT, put 2,4 (if it lives), & 6 under LANT, and then have USFF become the Man, Train, & Equip authority riding herd on the TYCOMs & Basic Phase executive functions, and doing Joint Force apportionment adjudications only, with LANT & PAC answering to to COCOMs, we just might have something. Integrated and Sustainment can/should be run by the operating forces.

As it is, and as it remains, there are too many competing interests and kingdoms fighting over the same crap. Where I tend to put world drama blame on the British, for USN drama I tend to lay it at the feet of USFF.

I was happy to see Joe Aucoin point the finger (more or less) where it needed to be pointed. The true crime here is how Davidson and others were protected, when they were square in the middle of what was wrong. It is still wrong that C3F, ATGPAC, and USFF were left "untouched". They had way more to do with it than SURFOR, who took a round, as well as PACFLT and C7F. The responsibility lays at their feet, not the customers' out forward. They failed to MTE. Period. <End Rant>.

by paperburn1
A U.S. Navy officer pleaded guilty to dereliction of duty Tuesday in the collision of a U.S. Navy destroyer that killed seven sailors last year. Lt. j.g. Sarah Coppock was sentenced to receive half-pay for three months and a letter of reprimand.

The plea was the result of an agreement between Coppock and military prosecutors before a special court-martial was supposed to begin at the Navy Yard in Washington.

Coppock is the first of four officers charged in the USS Fitzgerald's collision with a commercial ship off the coast of Japan in June. She was the officer of the deck at the time of the collision.

They went easy on her. very easy i wonder if they threw in a back rub. At least she proclaimed culpability

by ladajo
They are probably hoping that she doesn't attack the system that put her there, under-trained, under-experienced, under-equipped, and overly tasked.
This was the defense that was used by the XO of the USS San Antonio, Sean Kearns, for the death that occurred on her maiden deployment. And it worked.
It was embarrassing to the navy that he was right, and he was vindicated.

ladajo wrote:They are probably hoping that she doesn't attack the system that put her there, under-trained, under-experienced, under-equipped, and overly tasked.
This was the defense that was used by the XO of the USS San Antonio, Sean Kearns, for the death that occurred on her maiden deployment. And it worked.
It was embarrassing to the navy that he was right, and he was vindicated.


I realized what happened when I saw the word "her" in an article on this topic.

Last year the USN seemed very interested in rail-guns. Not so much this year.

Further, the rail-gun projectiles are being adapted to chemical propellant guns. Why the loss of interest in rail-guns? Anyone?

by paperburn1
https://www.financialexpress.com/defenc ... r/1165278/
Ski jump?
My guess is that the longer landing deck and catapult assisted ski jump are indicative of the age old problem of how much steam can you make.
I am will to guess (and show my ignorance) that their operation launch tempo is a third less than ours at max capacity. The ski jump limits loads and requires modded airframes limiting the aircraft as well.
It looks like they stole a russian design without the ability to make steam. "Short Takeoff But Arrested Recovery (STOBAR)"
And then applied the cheap chineseim method of making it work ,..sort of by adding a longer landing deck.
It does not look like to me they installed the electromagnetic launch system ( EMALS) they have been working on.

Officials of the Navy said, several aspects of the new carrier are different from those on the Liaoning. For example, the new ship’s island is shorter and the landing section is longer.

I would say they are trying to maximize takeoff weight by giving a little more run out as well. Also, the smaller island is probably to add one more spot or so on deck. A 50K MT hull is really not that big for air operations and embarked airframes. I am guessing that they are thinking to do some deck stows, given limited below decks space, which is probably also impacted by operating a conventional plant, thus requiring air intake and exhaust volumes, which in turn eat up interior volume. Interesting that they did not build a nuke powered platform. I guess they went for speed of construction.

And yes, as other nations can attest, ski jump decks do limit launch weights significantly. Which then ties to fuel and ordnance limits once airborne. I wonder how they intend to do tanking?

The U.S. Navy has developed hypervelocity shells for conventional deck guns, and the tech will be tested on land based 155mm artillery in the future. Imagine how effective an M777 could be with this. 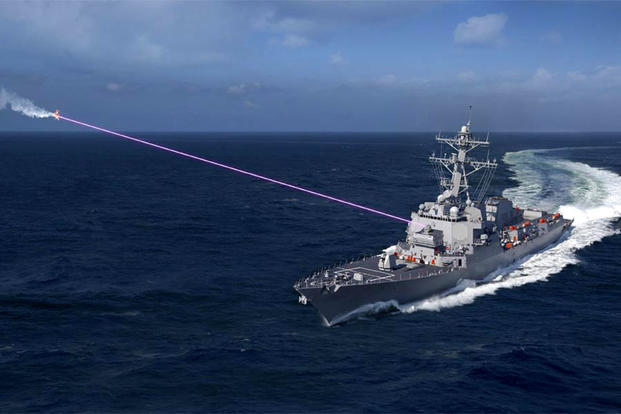 
The Congressional Research Service said in a May report that the Navy is developing three new ship-based weapons: solid-state lasers, an electromagnetic railgun and a gun-launched guided projectile that "could substantially improve" the ability of Navy surface ships to defend against surface craft, unmanned aerial vehicles and, eventually, anti-ship cruise missiles.

The Honolulu Star-Advertiser | By William Cole


The Pearl Harbor-based USS Preble will be the first destroyer to be equipped with a high-energy laser to counter surface craft and unmanned aerial systems, according to a published report, with the Navy planning to one day use the powerful light beams to defend against Chinese or Russian cruise missiles.

Rear Adm. Ronald Boxall, the Navy's director of surface warfare, told Defense News that the Preble will be outfitted in 2021 with the High Energy Laser and Integrated Optical-dazzler With Surveillance system, or HELIOS.


"We are making the decision to put the laser on our (destroyers)," Boxall said. "It's going to start with Preble in 2021, and when we do that, that will now be her close-in weapon that we now continue to upgrade," according to Defense News.

The Phalanx close-in weapon system is used now to defend against airborne threats by spitting out a stream of projectiles from its automated 20 mm Gatling gun.

The Navy awarded Lockheed Martin a $150 million contract in 2018, with options worth up to $943 million, for the development of two high-power laser systems for testing on a destroyer and on land.

With the HELIOS system, Lockheed Martin said it will "help the Navy take a major step forward in its goal to field a laser weapon system aboard surface ships."

The Congressional Research Service said in a May report that the Navy is developing three new ship-based weapons: solid-state lasers, an electromagnetic railgun and a gun-launched guided projectile that "could substantially improve" the ability of Navy surface ships to defend against surface craft, unmanned aerial vehicles and, eventually, anti-ship cruise missiles.

"Any one of these new weapons, if successfully developed and deployed, might be regarded as a 'game changer' for defending Navy surface ships" against enemy missiles, the report states.

Hawaii already has been a test site for the gun-launched guided projectile, also known as the hypervelocity projectile, as well as flight-testing of a hypersonic vehicle.

The Navy has made "substantial progress" toward deploying lasers on ships, which would be used initially for jamming or confusing (i.e. "dazzling") enemy surveillance sensors and for countering small boats and unmanned aerial vehicles, the research service said.

The Modern War Institute at West Point wrote in late 2018 that drone swarm technology is a growing threat. The report said China is interested in swarm technology as a method of attacking aircraft carriers.

Iran's Defense Ministry, meanwhile, announced in March that it had conducted an exercise in the Persian Gulf involving 50 combat drones.

The HELIOS effort is focused on rapidly fielding a 60-kilowatt high-energy laser with "growth potential" to 150 kilowatts.

Lockheed Martin said it demonstrated that a 10-kilowatt system can defeat small airborne targets with the "speed of light" capability and that a 30-kilowatt system had disabled a stationary truck target.

The Navy previously tested a 30-kilowatt laser in 2017 aboard the afloat forward staging base USS Ponce, shooting a small Scan Eagle unmanned aerial vehicle out of the sky.

With further development, lasers can be used to save costly defensive missiles for the most sophisticated threats. Challenges include packing enough power on a ship, with advances needed to scale power into the hundreds of kilowatts, the Navy said.

More From You Tube:

USS PREBLE WILL BE THE FIRST WARSHIP TO HAVE LASER WEAPON !!

USS Preble which is based out of the Pearl Harbor will be the first American destroyer to be equipped with a high-energy laser.

Rear Adm. Ronald Boxall, the U.S Navy's director of surface warfare, told Defense News that the USS Preble will be fitted with HELIOS by 2021.

High energy lasers are being seen as a way to defend against Chinese or Russian cruise missiles, drones swarms, and small surface crafts.

As per Defense News Boxall said,
"We are making the decision to put the laser on our (destroyers). It's going to start with Preble in 2021, and when we do that, that will now be her close-in weapon that we now continue to upgrade”

USS Preble is an Arleigh Burke Class guided missile destroyer of U.S Navy.
Arleigh Burke-class warships were designed as multi-mission destroyers and it is the 38th destroyer of the class.
She is named after Commodore Edward Preble, who served in the American Revolutionary War and was one of the early leaders of the US Navy.

It was built by Ingalls Shipbuilding and was commissioned on 9 November 2002.

In this video, Defense Updates analyses the implication of fitting HELIOS in USS Preble.

A U.S Navy warship USS Portland will have a laser five times stronger than the one the service has tested in the past.

Thomas Rivers, program manager for the amphibious warfare program office, said at the Modern Day Marine 2019 expo that "Big things" are expected from the Portland's new laser
He added, "They're just putting it on the ship now, and this may be the beginning of seeing a lot more lasers coming onto different ships.

https://www.youtube.com/watch?v=gRGhUb-lG9k
All times are UTC
Page 22 of 22