Electron currents in plasma are usually modeled using classical diffusion. However, semiconductor studies have shown that there is a problem with using classical diffusion for modeling electron conductance: it leads to nearly uniform probability distribution of electrons, what means that electric field would make them flow - making semiconductor a conductor.
In contrast, semiconductor is usually not a conductor due to Anderson localization: e.g. QM ground state has highly localized density, preventing conductance.

Maximal entropy random walk (MERW) allows to understand and repair this discrepancy: https://en.wikipedia.org/wiki/Maximal_e ... andom_walk
It shows that standard diffusion often only approximates the principle of maximum entropy required by statistical physics modeling. MERW repairs this approximation, by the way repairing the discrepancy with QM prediction (and reality) - its stationary probability distribution is exactly as for quantum ground state: with Anderson-like localization property.
The agreement can be also seen through popular euclidean path integral formulation - there are some small differences but both assume uniform or Boltzmann distribution among possible paths.

To see that such universal thermodynamical considerations are not restricted to nanoscale, imagine 1D potential well: V=0 at [0,1], infinite otherwise. Standard diffusion would obviously predict rho = 1. In contrast, both MERW and QM would predict rho ~ sin^2 stationary probability distribution - with avoidance of the boundaries - in any scale: 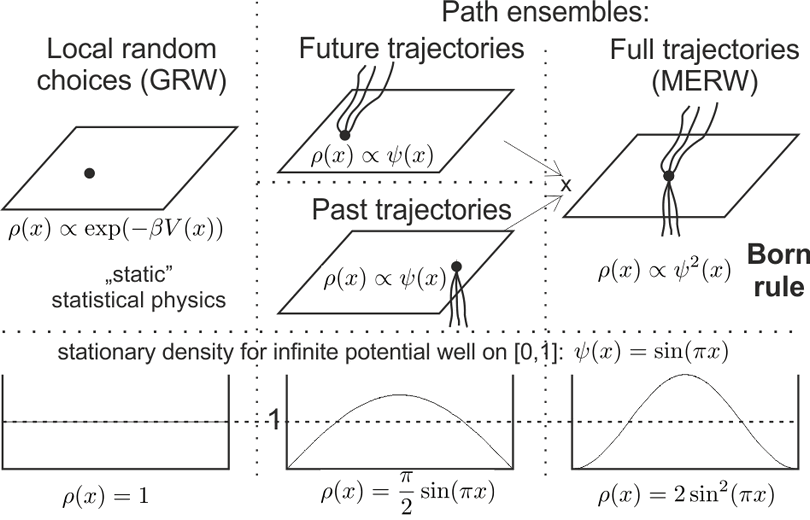 Sure in practice we have no infinite potential barriers, but energy of electrons is comparable to local potential differences - of barrier slope. For complex inhomogeneous filed such thermodynamical effect can be huge - while small local differences of potential lead to small differences between local behavior of standard stochastic propagator and maximizing entropy QM-like ... globally they lead to completely different stationary probability distribution: while standard diffusion has nearly uniform distribution, MERW/QM ground state can have localization with density lower by many orders of magnitude.

Here is a simple Mathematica conductance simulator for standard diffusion (GRW) and MERW : http://demonstrations.wolfram.com/Elect ... ndomWalks/
Intuitively, while in standard diffusion electron flow is nearly uniform, in MERW it kinds of short-circuits through lowest resistance regions, like in formation of lightning.