And also don't forget that the Russian Ukraine Adventure cost them access to some of the most experience rocket engine builders and facilities.
The development of atomic power, though it could confer unimaginable blessings on mankind, is something that is dreaded by the owners of coal mines and oil wells. (Hazlitt)
What I want to do is to look up C. . . . I call him the Forgotten Man. (Sumner)
Top

At T = +6:02 it seems like a very near miss with some other (fairly big) object.Maybe it was just some space trash or an active object, but it was in my understanding that anything orbiting earth bigger than 1 meter was supposed to be under constant monitoring, so I get to wonder how that object managed to pass so near to the returning first stage.....
A society of dogmas is a dead society.
Top

S1 MECO is no where near orbital altitude and velocity. This was most likely just ice that fell off.
Top

S1 MECO is at T= +2:40. I am speaking about the object at T=+6:02. Also at that moment the S1 is no where near stable orbital altitude, but that object does look quite big and it doesn't really look like a piece of ice.
A society of dogmas is a dead society.
Top

Maui
Posts: 577
Joined: Wed Apr 09, 2008 12:10 am
Location: Madison, WI
[phpBB Debug] PHP Warning: in file [ROOT]/vendor/twig/twig/lib/Twig/Extension/Core.php on line 1236: count(): Parameter must be an array or an object that implements Countable

National Geographic has an episode of their Mars series out where they go behind the scenes for the Falcon Heavy launch. Definitely worth watching: https://www.nationalgeographic.com/tv/w ... 09efc1607/
Top

Maui
Posts: 577
Joined: Wed Apr 09, 2008 12:10 am
Location: Madison, WI
[phpBB Debug] PHP Warning: in file [ROOT]/vendor/twig/twig/lib/Twig/Extension/Core.php on line 1236: count(): Parameter must be an array or an object that implements Countable

A society of dogmas is a dead society.
Top

Consensus on the SpaceX Facebook group is that it is a chunk of kerosene soot covered LOX ice. Several pieces can be seen breaking away from the base in earlier parts of the video.

This piece appears right about the time that the re-entry chill-down was beginning, which involves LOX purge of the turbopump. Assuming this piece of ice was attached to the turbopump exhaust or in the throat of a Merlin engine bell, then the chill-down flow of LOX would likely dislodge that ice. Because there's a very slight amount of atmosphere (~ 1 micro-torr) at that altitude, the ice would break away, fall away from the engine and then the atmospheric drag would cause it to decelerate more than the much more massive rocket body.

This slow motion deceleration, very alien appearing to us where the atmosphere is thick and would cause rapid decelerations, would make it appear to be a large object at a distance, while actually being only a few inches across.
Top

The mystery to me is that this object seems to be ahead of the stage as the stage overtakes it. The stage has done nothing except a flip end to end while continuing on a ballistic path from MECO. That implies to me that everything that was carried along from launch, ice or whatever is ruled out because it could not have passed the stage since MECO, and if it fell away from the stage before MECO it would be way behind, not ahead of the stage.
Agreed, it is not a satellite at that low altitude and speed. It couldn't even be space debris because its speed is too low. Could it be something from the second stage? It doesn't look like a fairing half but I don't know what a fairing half might look like from that angle. There is still the problem that the object appears to be ahead of and below the stage. The fairing could be ahead of, but how could it be below the first stage?

As for it being LOX ice from the stage itself being coughed out then slowed by drag, note that it is not the relative mass of the ice vs the stage that matters. it is the relative "fluffiness" of each object. LOX ice is not very fluffy, while the stage is nearly empty and so quite fluffy, relatively speaking. But this line of reasoning can only lead to an argument about the amount of gaseous oxygen entrained within the LOX ice so I guess we'll never know.
Aero
Top

More financing. More sustainable, in some ways.
Evil is evil, no matter how small
Top

paperburn1
Posts: 2457
Joined: Fri Jun 19, 2009 5:53 am
Location: Third rock from the sun.
[phpBB Debug] PHP Warning: in file [ROOT]/vendor/twig/twig/lib/Twig/Extension/Core.php on line 1236: count(): Parameter must be an array or an object that implements Countable

Sorry guys , no little green men or super secret squirrel satellite. It is oxygen ice from inside the nozzle on stage two when the turbo pump runs a pre-chill cycle before startup, hence the blueish hue to it.﻿

It falls on top of stage one then falls off. Also stage one pre cools before firing as well on its way back to landing unfortunately all the camera views are not available to the public and vary for each launch. The numbers varys from "a whole lot and even more than that" there are even event cameras in the lox / fuel tanks and everyplace else in a 360 degree coverage. 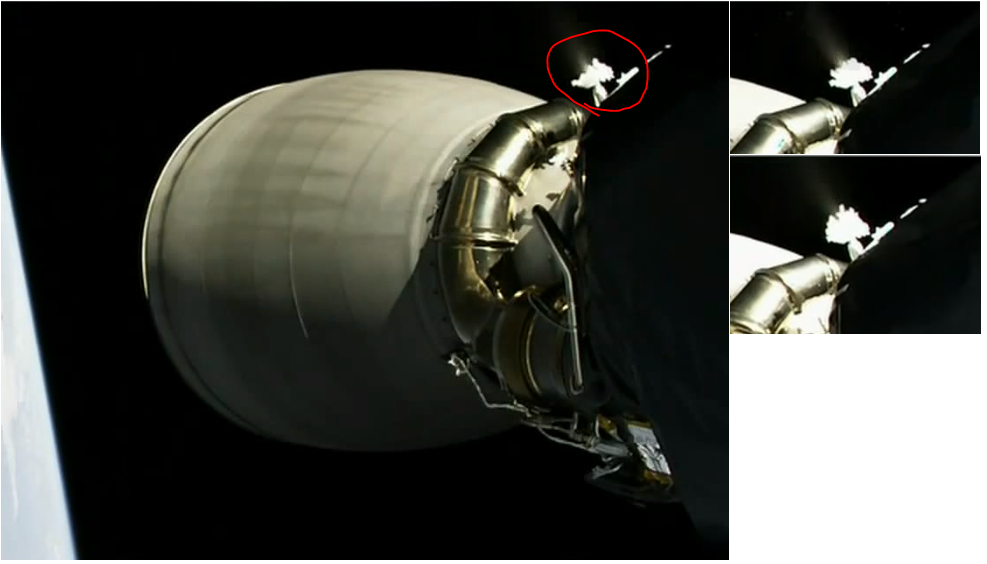 Last edited by paperburn1 on Sat Nov 17, 2018 11:32 pm, edited 2 times in total.
I am not a nuclear physicist, but play one on the internet.
Top
Post Reply
[phpBB Debug] PHP Warning: in file [ROOT]/vendor/twig/twig/lib/Twig/Extension/Core.php on line 1236: count(): Parameter must be an array or an object that implements Countable

Users browsing this forum: No registered users and 7 guests