Plugged D Tibbits' proposal into my code and got 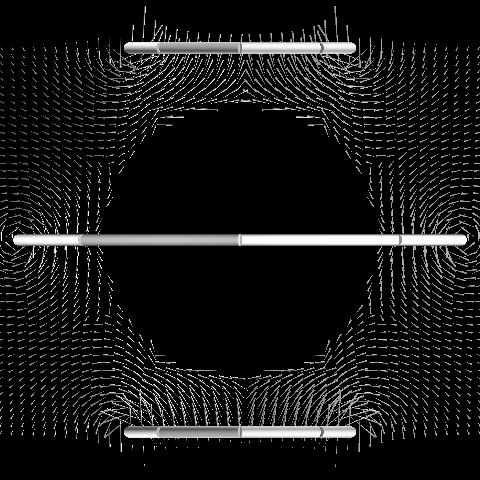 Assuming the estimate of plasma pressure distribution is reasonable we have a nice nearly spherical well when run in wiffleball mode. And 2 full line cusps.
The daylight is uncomfortably bright for eyes so long in the dark.
Top

To error is human... and I'm very human.
Top

Another image showing B field modeling and some of my ruminations...

The three ring design can be stacked though, by using one end magnet for the start of the next array.This eliminates one escape point cusp, and also further limits input opportunities.

If the Skunks Works machine is a derivative of the Polywell concept as I believe, then Dr Park's demonstration of an unequivical Wilffleball can only reenforce their position- assuming they had not already satisfied this limiting criticism.

Looking at Dan's mod of Torulf's pic, it would seem that electron recirculation/oscillation (prior arguments on T-P about which dominates in a Polywell...) would be mainly along a distorted torus enveloping the central coil.

For propulsion applications, it might make sense to inject electrons along the axis through one point cusp. A slightly weaker field for the coil on the opposite end would encourage fusion products to exit in that direction.
Top

I'm not sure what you mean by a torus electron containment distribution. The electron containment would be from reflection from the Wiffleball surface just like a Polywell. The lowest B field in a low Beta situation would be in a torus/ sphere/ dumbell depending on relative central and end magnet strengths, but this does not necessarily match the electron distribution. In Bussard's comments pure electron plasmas have electrons spending most of their time near the wiffleball border, with large angular momentum components (square potential well). Only with the ions do the electrons assume a more parabolic potential well distribution. Near the Wiffleball border the shape is a spiky ball in a Polywell, and a funny flared cylindrical shape in the 2 ring machine, at least at low Beta. At high Beta the system much trend towards a more spherical shape (I think).

I think the central focus of minimal B field relates more to the symmetrical expansion of the Wiffleball border as it forms. This near spherical expansion allows for the near Beta=1 condition without "stresses"- B field bulging asymetrically, which would result in B field cusp local failure before full global Beta=1 conditions are reached.

The central focus / confluence of ions is beneficial as it increases fusion at the same edge pressure conditions, something which may be nessisary for P-B11 fusion. Also while fusion is increased, Bremsstruhlung is decreased proportionately, within limits with central confluence. I think allowing weaker cusp confinement on one side may harm this central confluence. I doubt the input benefits or direct conversion versus direct fusion product exhaust would be helped much. The exception to this may be if these variations can be timed on scales similar to the plasma frequency, probably more than a few MHtz. I doubt the B fields could be changed that fast practically, though local microwave heating, etc and Nebel POPS type effects might allow for various interesting global and/ or local interactions.My idea for selective direct power conversion versus directed thrust is that this is controlled external to the magrid. The conversion grids are organized for either energy harvesting and/ or thrust vectoring, ideally with the same structure and only switches being changed.

With a greater major diameter of the central magnet, the line cusp exit cone is mostly towards the end. Any charged particles would mostly (?) follow the field lines either around the central magnet or around the end magnets. I suspect that most may be around the end magnets. If around the central magnet, then a torus distribution of these charged particles is reasonable. If around the ends, more of a dumbbell with inversion?()- a warped torus perhaps. In either case this recirculating cloud would follow these patterns only if there are no external modifiers- like chamber wall, external grids or grounding surfaces. Bussard emphasized the importance of recirculation only involving reentry through the same cusp- looping around to another cusp is bad because that allows for progressive upscattering of electrons leading to runaway drive voltage requirements. A upscattered electron is lost to external grounding surfaces befor it can complete a loop. Non upscattered electrons are stoped and reversed through the same cusp by the positive charge on the magrid. Note that the energy of the upscattered electrons is recovered to the extent of the voltage of the magrid, so only the excess upscattered portion of the energy is lost to the system.

This brings up an other item that confuses me.Bussard claimed that recirculation was a key component of achieving overall electron confinement to the extent that Q >1 is possible (or at least Q great enough to be useful). Yet WB8 and 'Mini B' seem to have high voltage e- gun, with the magrid at ground. This would seem to eliminate most of the possible recirculation. Any electron that escaped would not be decellerated by the magrid and would be lost with it's full escape energy. The exception would be looping around to another cusp. But this brings up the upscatter problem. Unless there is some clever way of moderating these escape electrons energy, perhaps with external grids, the run away voltage problem would manifest. This was one of the arguements that A. Carlson used to insist that the Polywell was non viable. Recirculation results in a near 10X improvement in net effective elecron confinement. Abondoning this through using a grounded magrid seems counter productive. As such, I don't know why EMC2 seems to have followed this route of high voltage e- guns.

Mini B has a ~ 7,000 volt E-gun. WB 8 in the picture has a similar appearing "E-gun " sticking out the side. Some voltage on the E-gun is obviously needed for extraction purposes and initial focusing, but it seems that a high positive potential on the magrid would aid focus further and help prevent electron beam spread before entry (higher speed results in less time for beam spread) and subsequent mirror rejection by the B fields. A push- pull optimization would seem to be superior to a push only approach. WB6 was essentially a pull method only while Mini B was a push only. Also, without a positively charged magrid rejected electrons mirror away from the magrid without decelerating, the energy is lost from the system. The exception would be looping around continuously until somehow the electron penetrates a cusp (if the electron is on a field line that mirrors outside the magrid, it would continue to do so indefinitely, at least in a collisionless plasma, in the actual collisional plasma in these machine the interactions are much more messy). But, even if that could work it results in greater external electrons which may effect the potential well (think of WB5), and also arcing concerns.

A newer version due to Tibbets ideas.
https://www.flickr.com/photos/77233366@N08/14608188299/
Top
Post Reply
[phpBB Debug] PHP Warning: in file [ROOT]/vendor/twig/twig/lib/Twig/Extension/Core.php on line 1236: count(): Parameter must be an array or an object that implements Countable